The ultimate goal of the Surface Plasmon Resonance (SPR) experiment is to understand angular momentum states of surface plasmons (SPs). This wiki article assumes that the reader has general knowledge of optics and light fields.

A surface plasmon is very similar, conceptually, to a photon confined to a 2-dimensional surface. The coupling of light to a conductor generates charge density waves that propagate based on the dielectric constant and thickness of the conductor. These two conditions generally dictate the momentum of a surface plasmon (and therefore the associated wave number, k).

In practice, an approximately 43nm thick gold film applied to the back of a glass prism makes for an excellent plasmon setup. Gold is an excellent conductor. Better conduction increases the wave number associated with surface plasmons in a material, allowing for the plasmon resonant angle to be above the critical angle. While silver is an even better conductor, its corrosion in atmosphere makes it less practical.

When a surface plasmon encounters a defect such as a bump or a hole in the conducting surface along which it is propagating, the defect acts as a scatterer for the SP (as it is locally off-resonance for that wavelength of SP) and the SP either deflects off the defect or is re-radiated from the surface, converting back to a photon. In order to conserve linear momentum, a re-radiated SP leaves the dielectric film at the angle of incidence matching its momentum in the plane of propagation. In other words, if a plasmon generated by light of a given wavelength whose resonant angle is θ is ejected from the conductive surface, it will be ejected at the same wavelength as the generated light at the angle θ.

Since any azimuthal angle in the plane of the conductor can satisfy the above constrain on the angle of exit of a re-radiated plasmon, a hollow cone of radiation is observed when a surface plasmon resonance is generated in a film with defects sufficiently large to scatter and eject SPs. 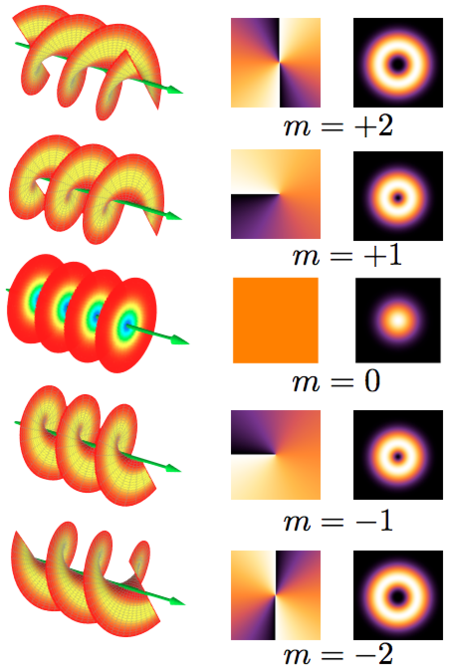