Electron Spin Resonance (ESR) is a phenomenon, usefull for the investigation of materials which contain unpaired spins. Those are caused by various sources. One are not completely filled atomic shells, however, the more interesting ESR signals arise from different circumstances combined in the term defect. For instance, a important one is impurities of semiconductors or isolators which can trap electron or holes. Therefore this measuring technique is very powerfull evaluation of material properties and is used in lots of research fields in physics, chemistry and biology.

Precession of the two Quantum Vectors

around the magnetic field

As the term Electron Spin Resonance already implies, the most essential part of the entire topic is the Spin, an intrinsic angular momentum of the electron. In an atom most of the electron are paired regarding spin. That is, each electron has a partner with an opposite spin, creating a zero net spin. Depending on the electron configuration of an atom or one step above in molecules and solids respectively, it is possible that there are a few or even many single electrons, being up to material.

Generally the magnetic moment of an electron is given by

is the Bohr's magneton and

the magnetogyric ratio, for a free electron it is

. This formula includes the orbital angular momentum as well. With ESR it is only possible to detect and investigate the spin component of the total magnetic moment. Hence, in the further deviation we will look at the pure magnetic moment originating from the spin

and its magnetic moment

The two allowed projections of

onto the z axis:

In generell, the energy

of a magnetic moment

is related to the spin

, which is a so called Quantum Vector with special properties:

Incedentally, those two quantities are the best way to distinguish the state of the electron, because only their operator commute and hence, are mesasurable at the same time. For instance, it is not possible to measure two of the three cartesian components of the spin vector simultaneously. 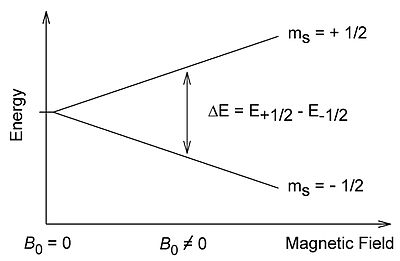 The split of one energy state into two, once a magnetic field gets applied.

The equation for the energy of the electron's spin in an applied magnetic field contains a dot product between the magnetic moment and the B-field:

It may seem to complicate the situation, but acutally it simplifies it a lot. We have chosen our magnetic field to point into the

direction. Since the spin is characterized by the projection onto the

axis, depicted by the Quantum number

, the dot product cancels to

are both natural constants at this point. If a external magnetic field

is applied (positive value, because we picked the

orientation of our coordinate system in such a way), the electron's energy is reduced or raised, depending whether

is negative or positive, respectively. The original single energy state, which we still get out of the equation for

is proportional to the strength of the applied magnetic field. Therefore that difference can be tuned very precisely by the experimental setup, which is very important for the latter detection of the ESR signal.

ranges in the microwave photon band, if you convert the energy to wavelength or rather frequency. This is the point, where the name of the entire phenomenon originates. Namely, if one irradiates the unpaired spin, which normally sits in the lower energy state (due to general energy minimization of nature), with the correct frequency, the energy gets absorbed, combined with a transition to the upper level. In this case, the energy of the photons match exactly the energy difference between both states. Physicist call this situation Electron Spin Resonance.

is Planck's constant and

the frequency of the incident light.

Other than the magnetogyric ration

are all quantities either natural constants or measured values. Above I claimed that this value is a natural constant, too. Well, technically it is one, however, depends on the material and its compounds and especially spin stucture. Taking the previous equation as well as transferring it to an expression for the magnetogyric ratio

yields material properties with regard to the spin configuration. For example, the comparison to the definite value of a free electron is a indicator for various substances' features.